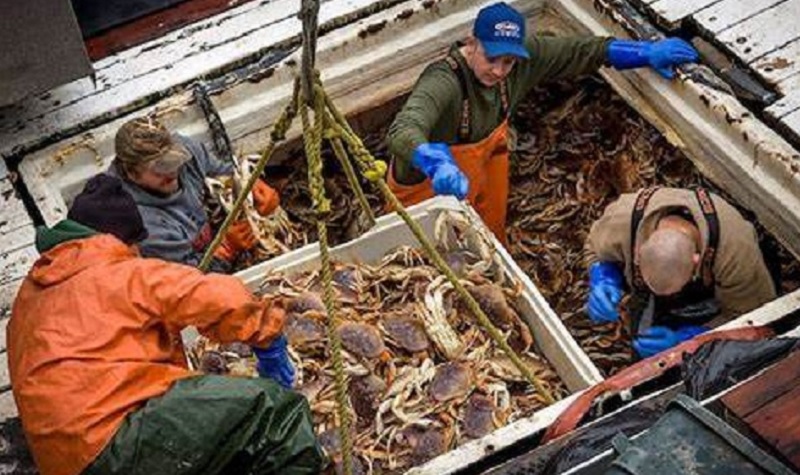 A crash in crab populations in the U.S. state of Alaska is being partially blamed on a mortality event scientists cannot fully explain.

A catastrophic drop in Alaska’s snow crab population led the state to set a much lower quota for the upcoming season. Along with a significant drop to the Bering Sea bairdi crab quota and the closure of the winter Bristol Bay red king crab fishery, Alaska’s overall crab fishery could lose up to USD 100 million (EUR 86.5 million) or more in value in the 2021-2022 season, according to the Alaska Bering Sea Crabbers.

Scientific surveying of the snow crab fishery conducted by the Alaska Department of Fish and Game found a 99 percent drop in immature females and substantial drops in mature crab compared to three years ago. The surveys said at an October meeting of the North Pacific Fishery Management Council that the bulk of the snow crab population had migrated to deeper waters, but that the movement could not explain the lower population count, according to the Alaska Journal of Commerce.

“We really do think that … some sort of mortality event did occur,” ADF&G Biologist Katie Palof said.

In response, the council advised the 2021-2022 Bering Sea snow crab quota be set at 12.4 million pounds, but the state of Alaska opted to go even lower, to 5.6 million pounds, down 88 percent from the 45 million pounds available the year prior.

The sharp population declines came despite state surveys reporting robust snow crab recruitment classes in 2017 and 2018. Scientists, unable to say with certainty what has caused the catastrophic losses, have bemoaned a lack of data from 2020 as scientific surveys were canceled that year due to the COVID-19 pandemic. Their best guess is that less ice cover in 2018 and 2019 reduced the bottom-sitting cold pool thought to protect young crab from predatory cod, and the fatal bitter crab syndrome caused more mortalities, according to the Kodiak Daily Mirror. Some fishermen have also blamed bycatch as a problem afflicting crab populations.

Other crab populations have also declined, leading the state to set the Bering Sea bairdi (tanner) crab quota at 1.1 million pounds, down 53 percent from last year’s 2.2 million quota. And Bristol Bay’s red king crab fishery, which has been in steady decline, won’t take place for the first time in 25 years, following declines from 20 million pounds in the 2008-2009 season to just 2.648 million pounds last year. Despite the lowered quota, the red king crab grossed fishermen USD 44.8 million (EUR 38.8 million) last year, based on an average price of USD 11.87 (EUR 10.27) per pound.

“Alaska’s Bering Sea crab fishermen are bracing for over a USD 200 million [EUR 173.1 million] hit to harvesters if recommendations from scientists are adopted by decision-makers this week,” Alaska Bering Sea Crabbers Executive Director Jamie Goen wrote to the council in October, before it made its quota recommendations. “And that number grows once you consider impacts to processors, communities, and on up the supply chain.”

Crabbers are asking that all sectors, including their own, reduce fishing impacts on crab through avoiding closed areas, ramp up hotspot reporting among skippers in the fleet, and reduce mortality by “limiting the amount of time crab are on deck and by gently returning them to the water.”

"What we are proposing with an emergency closed area and requested voluntary industry actions from all fishing sectors should help crab stocks rebound and hopefully allow us to have a fishery next year,” Goen said.

With all the closures and lowered limits, the Dungeness crab fishery in the Gulf of Alaska has become Alaska’s largest crab fishery. Even the “average” Dungeness crab haul of 7.5 million pounds during its summer fishery, which ended in August, is higher than the current snow crab quota. In second place is the Aleutian Islands golden king crab fishery, which hauled in six million pounds, according to the Anchorage Daily News. The recent Dungeness season brought in an estimated USD 14 million (EUR 12.1 million) in value to fishermen, the newspaper reported.

Victoria, British Columbia, Canada-based Tradex Foods, which imports 40 million pounds of frozen seafood annually, said in its November market insight report the dearth of Alaska crab will likely result in the United States making up the difference through imports, primarily from Canada and Russia. Russia caught 91.3 million pounds of snow crab in 2021 and Canada caught 159 million pounds. Russia will increase its total allowable catch in 2022 to 103 million pounds, partially thanks to its opening of a new snow crab fishing area in the Kara Sea resulting in an additional 2.1 million pounds, while Canada won’t set its 2022 quota until March 2022. But even if it remains around its 2021 level, the cuts to Alaska’s quota will leave the global market short between 7 and 9 percent of its 2021 total.

“There is opilio snow crab in the marketplace. However, the question is, will it all be bought up in a frenzy or will it last through to the new year?” Tradex Director of Purchasing Nathan Brown said. “I believe that whenever pricing goes up beyond usual values, people inherently become cautious about buying. However, with food prices up in all proteins and the upcoming holidays coming, my prediction is a buying frenzy. My suggestion is that whomever uses snow crab for Thanksgiving and Christmas should stock up now as Russia will be focusing on king crab for the foreseeable future. Once the current snow crab that is in the U.S.A. and incoming is gone, it will be gone until February.”

Meanwhile, in Alaska, crabbers are calling for additional sustainability measures to be implemented to preserve and rebuild the state’s stocks, including the implementation of more comprehensive conservation measures for crab habitat and spawning grounds, and the creation of incentives to reduce crab bycatch caused by other fishing sectors, including bottom-trawlers.

“What we are proposing with an emergency closed area and requested voluntary actions from all fishing sectors should help crab stocks rebound and hopefully allow us to have a [king crab] fishery next year,” Goen said at the meeting.

“Crab are moving in unprecedented ways and new closure areas would be an uneducated guess with high potential for unintended impacts,” Woodley said, according to the Alaska Journal of Commerce.

Woodley said the closure might move bottom trawlers into other areas used by king crab.